NEI has over 1600 farmers registered in our agricultural network. Each farmer is provided with training and support in the practice of intercropping vanilla with their more traditional crops like bananas. In order to accomplish this training, NEI operates using a Farmer Champion model. Farmer Champions are well-respected members of their community who, in addition to caring for their own vanilla vines, visit and advise other farmers in their area. Farmer Champions attend training sessions, on topics such as pollination, disease and pest management, and harvesting, and disseminate this knowledge throughout our farmer network.

We are happy to introduce you to two of our most outstanding Farmer Champions! 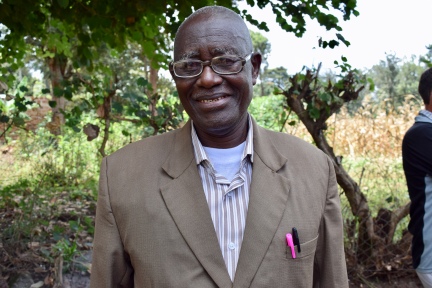 Wilfred lives in the village of Mbweera in the Kilimanjaro region with his wife. After retiring from teaching, Wilfred expanded his small farm and now grows coffee, bananas, and vanilla vines. He has been with NEI for 5 years and has planted 70 vanilla vines at his farm!

Wilfred hopes to add more vanilla vines in the future. With his extra income from vanilla, he is able to invest in other economic activities, such as raising pigs and poultry, or his passion for beekeeping. He has also been able to extend the educational opportunities for his family.

Wilfred has a very important role at NEI. As a Farmer Champion, it is Wilfred’s role to share skills learned from NEI’s training sessions with our other farmers. For Wilfred this comes naturally, as his teaching background makes him a natural leader in the community.

Evaline is a retired nurse who lives in the village of Mbosho in the Kilimanjaro region. Despite being retired, she often still works in her local dispensary, as well as looking after her farm and helping take care of her five grandchildren. Evaline grows coffee, bananas, maize, beans and vanilla.

Evaline has been growing vanilla vines for 12 years. This year, she had one of the largest harvests of all NEI’s farmers, despite the unfavourable weather. She worked incredibly hard to carry buckets of water to her plants to make sure the vines thrived.

Here, Evaline is shown participating in NEI’s training on pollination.

One thought on “Meet our Farmer Champions!”